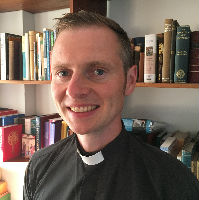 We are delighted to announce that Revd Mark Eminson has been appointed, subject to all legalities, Team Rector of Merton Priory Team. Mark is currently vicar of St Thomas a Becket Church in Pagham (near Bognor Regis), a post he has held for nearly 7 years.

We are looking forward to welcoming Mark, his wife Elise and their four children later this year.

Mark's Institution and Induction as Team Rector will take place on Wednesday 4 September at 7.30pm.